Welcome to the second annual Lakes Area Royal Faire! We’re so happy to have another Renaissance Festival in Minnesota!

It’s been a dream of mine to set up our own little weekend festival around here, so it’s great to know that it can and has been done. (Winter festival, anyone? You know the layers and fuzzy cloaks would be worth it.)

Rick and I were there for the first Lakes Area fair last year. It was pretty calm, but the turnout to each show was pretty good, and it was nice to have the chance to go around and interact with the other acts and vendors in our spare time. Rick fought as Sir Edmond DuBois in the Medieval Tourney, and I doubled as squire and photographer for the weekend.

The fair is relatively close to the northern part of the Twin Cities (about a 45 minute drive up from Minneapolis), but we took the opportunity to camp over at Interstate State Park, which cut our commute down to fifteen minutes. The fair lasted three days, but the lack of turnout to what was inevitably a work day for most people led coordinators to shrink this year’s fair down to just Saturday and Sunday. A learning experience for all.

Lions Park, where the Lakes Area Royal Fair is held, is a surprisingly enchanting venue for its modest size. It is home to a permanent covered stage and benches, where many of the scheduled music and dancing shows take place, and a charming island nestled in a serene little lake. The island, where several vendors were stationed, is accessible to visitors via a short land bridge near the stage.

If you’re new to Renaissance festivals, the summer Minnesota Renaissance Festival is too bustling or distant, or if you’re excited for an earlier, mild-weather start to the festival season, the Lakes Area Royal Faire is a good one to put on your calendar this spring.

We hope to see you there. 🙂 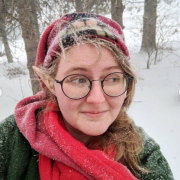 Mariah
Message
Previous article
What’s LARP and What’s It Like? In Game Edition!
Next article
The Sketchbook Project, Vol. 14